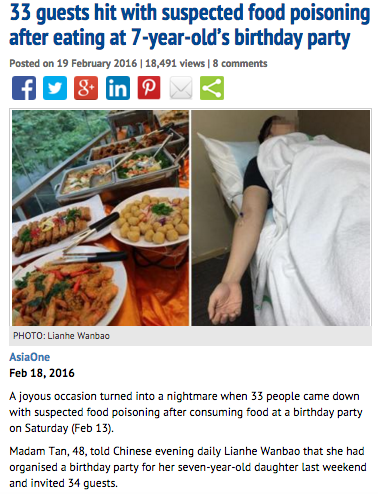 It was reported by http://singaporeseen.stomp.com.sg/, earlier on the 18th February 2016.

On the 13th February 2016, Madam Tan (age 48) , ordered a food catering for her daughter’s 7 year old birthday party. 33 of her guests were suspected food poisoning after consuming the buffet catering from Kuisine Catering.

Mdm Tan’s elder daughter’s boyfriend was reported, being sent to hospital and put to drip due to high fever.

“When contacted by the newspaper, Kuisine Catering confirmed that they had received the complaint from Madam Tan.

The caterer told Wanbao that the Ministry of Health (MOH) and the National Environment Agency (NEA) have surveyed the individuals affected and that the company is cooperating fully.

Kuisine’s management stressed that it has maintained high standards of hygiene through the years and this is the first time it has encountered such an incident.

“We hope to rectify the problem and we seek your kind understanding,” said the company.

The MOH, NEA and Agri-Food & Veterinary Authority of Singapore (AVA) released a joint statement to Wanbao today (Feb 18) saying that it is investigating the incident and has temporarily suspended the caterer’s operations.”